My Kind of Dressing Up A Classic but Trendy Outfit 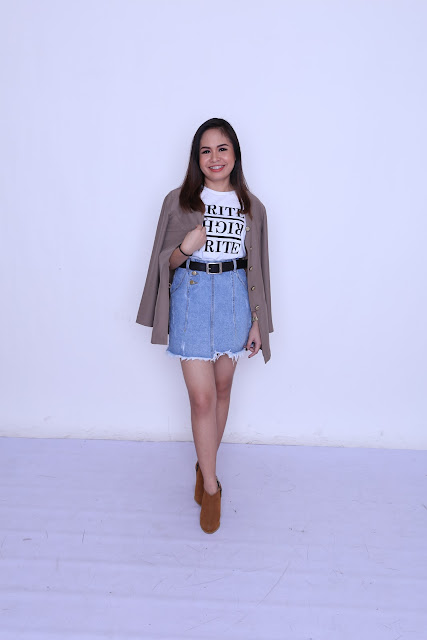 To be honest, I came up with a blog post like this because I'm kind of in a lazy mode right now but I want to update my blog and had to think of the most convenient topic I can write about without consuming much time in photography (my camera is low in battery). And then, voila, I have spare photos of myself wearing my creative photo outfit which were shots needed for my graduation. In my recent graduation post, I mentioned there that I will write a separate post about the outfit I wore for my creative shot. So...without further ado, here it is! 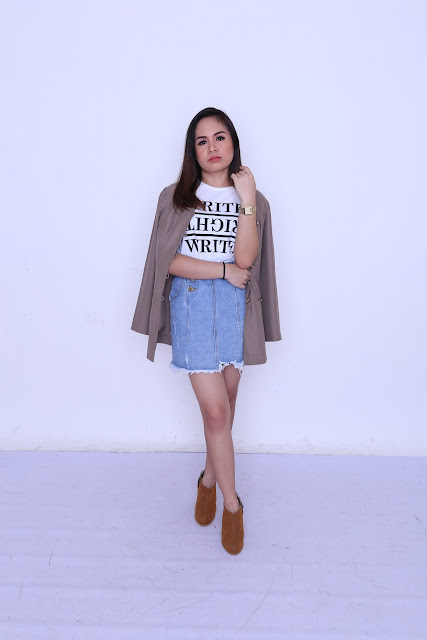 It was a day before the photo shoot and I haven't much thought about what to wear for my creative shot. I was not supposed to prepare anything 'creative' because I saw some schoolmates in their creative shots and they were only wearing basic casual outfits. I thought it's not something I should exert extensive effort not until my friends, in our group chat, kept borrowing stuff from each other. Those were not something you could easily pull off from one's wardrobe unless she's a model or a superstar. They even went to thrift shops to score some amazing finds and that was it! I was pressured!

I haven't had that much time preparing for something that would at least be a match for their creative outfits, I was hopeless but decided to still give this a shot. I rummaged through my wardrobe, get some pieces I rarely wear and combine everything. I spotted the brown classic blazer I got from my mom--it's something I never used but really liked--and decided to have this as part of my motif. For me, it's really a beautiful piece from the 90's, sewn when I wasn't even born but was meant for me and I never thought there will come a time that I'll reach for it. 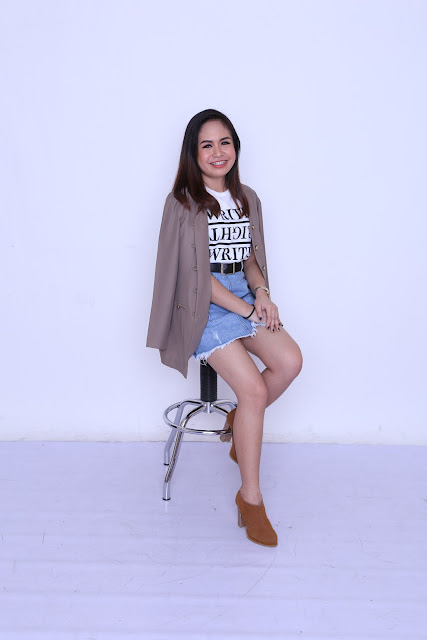 I know this will be the last time I'm getting photographed for my graduation, so I feel like wearing this white muscle tee I got from Artwork months ago which says Write Right Write. That's what I'm doing! Again, I never thought I'd reach for it as this was also my first time using it!


I can clearly see that my outfit would be a timeless piece but I want to wear this trendy skirt I got for only P120! Believe me, the quality's far from it's price tag! Anyway, it became clearer to me, I want something that is classic but with a touch of modernity. I think my outfit does not look creative for some, but I thought about it well enough, I planned a little for it, that for me, it's creative already. Especially when I paired it with a classic leather belt (I never thought I'd use) my mom and dad bought me. It's the first time I wore the leather belt from Beverly Hills and again, I'm glad I did not give it or throw it away. Such a nice touch to the outfit, right? Even the watch I wore was well-thought of. It was a classic piece from Casio and which compliments all gold buttons. 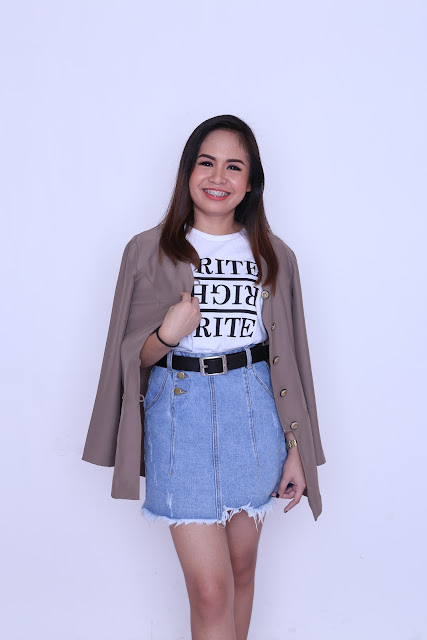 I was supposed to wear my Converse high-cut white leather sneakers, but decided to settle for a camel-colored boots instead which I borrowed from a friend on the spot. For me the boots are already a combination of what I am trying to create--classic and trendy.

So...what do you think of this look? Please tell me if you decided to recreate this outfit!

Email ThisBlogThis!Share to TwitterShare to FacebookShare to Pinterest
Labels: Fashion